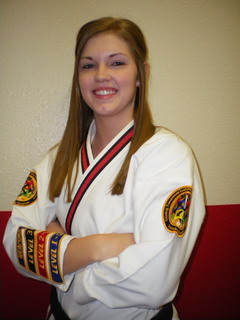 October 2010 Student of the Month-Brittany Leckey

Brittany was just nine years old when her brother started at KARATE FOR KIDS and she really wanted to do it, too.   From that simple beginning, she has trained steadily for eleven years and accomplished much:

Is that a lot for a 20-year-old to accomplish?   Well, not for one of our black belts.   Rather than talk about what happened to Brittany over the last eleven years, let’s focus on the type of black belt she has become.

“I really like being active as an instructor.  It can be a chore to get here, but when I am here I love it.   I really like being in charge of the class even if before hand I get nervous and freak out a little.  I always had talented instructors who helped me.  Now I want to do that for others.   I feel like I know a lot and that I can help others.“

Brittany is no different than anyone else who has made a life long commitment to Karate for Kids.  She, too, has had struggles and difficulties along the way.  For Brittany, the biggest issue was sparring.   At age twelve, she still was small and lots of girls in her tournament divisions were really big.   “I didn’t want to spar but my mom made me spar during my last year in the 11-13 year old group.   And then, after that, I didn’t spar for three whole years in tournaments.  As I got ready to enter the 17-29 year old division, I talked a lot with Senior Master Babin.  I was mad that he told me I had to spar.  But on tournament day, I remember, Mr. Nicholas Babin also insisted that I spar.  Well, I did it and I took 1st place after not sparring in competition for three years.”

Senior Master Babin says, “Brittany was indeed very small at age thirteen and her muscles had not really developed.  However, by the time she reached age seventeen, she had grown into a really strong young woman who was demonstrating that power in class through her form and board breaking. As her instructor, I knew she had what it took to ‘hold her own’ in the adult women’s sparring group, but she did not know that yet for herself.  I knew if I insisted, she would succeed and then she would have a whole new level of confidence and personal growth.”

Then, in March 2009 at a tournament, she got challenged again when she had to face a rude, out-of-control partner.  In her own words. . .

“I had a history of competition with this girl.   Over the last year, in competitions Kalinda and I would trade winning 1st in forms and weapons.  In Orlando, I beat her in forms and weapons. When we competed in Las Vegas in March she beat me in weapons and in forms as well.   We got ready for sparring and she was just rude in the ring.  She went at me really hard, but I was still ahead in points.  Then she lost her balance and as she fell, she pulled me to the ground with her.  She did that about 5 times.  The judges warned her.  She seemed out of control and I knew I had to keep my guard up. Her rude behavior really made me want to win.    I got up and I scored again even though I was hurting bad. And I won the match.”

The important point here is that Brittany shared all of this with Senior Master Babin.   “She was concerned that she had acted badly, that she had lost control.  But she also knew that the other girl was really out of control and that she (Brittany) had to protect herself.   When you are as physically strong a black belt as Brittany is, this is a real moral dilemma.   She didn’t want to get hurt, or hurt the girl, but she did understand the importance of standing up for herself.  The real victory here was not winning the match but Brittany’s new understanding of her ability.  This will transfer over into others areas of her life as she faces future life challenges. She did the right thing to tell me all about it and in doing so, has gained a whole new insight into her life as a black belt.   This incident gave Brittany clarity of purpose that she did not have before and complete confidence in her ability to defend herself and to think and perform under pressure.”

Her instructors helped Brittany see and achieve her physical and mental potential in free sparring.  If they had left it up to Brittany she may have never sparred again and never would have made this incredible personal breakthrough.

Brittany’s comments to anyone thinking about training at Babin’s Karate for Kids:

“Give it all you’ve got.  It has been my life for 10 years and it has helped me in everything else I have done.  It’s given me lots of confidence in other things I do.  And it makes me more open, not shy.  In high school I played basketball, softball and lettered in badminton.  I got straight A’s and an honor seal on my diploma. I also was awarded a $1000 scholarship from the H.U. Lee foundation.”