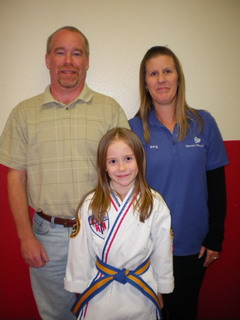 Over the years, we have met many many families.  Some experience huge success in our Karate for Kids program and others not so much.    Regardless of a student’s personal ability or potential, it’s really the parents behind the scenes that truly make the difference. Lack of parental support is the #1 reason children do not achieve success.  This month we talked to Jeff and Candice Ebert, whose nine-year-old daughter, Brandee is now a blue belt.   Brandee’s potential and talent will be developed because of the commitment and foresight of her parents.

Consistent attendance is the most significant contributor to success in our program.  Thanks to her parents Brandee has averaged 15 classes per month over the last 3 months, not including her private lessons.  (more on that later)  The Eberts have managed to coordinate their busy lives, managing two careers, family time, private time, and karate.  There is no doubt that Karate for Kids is a priority for the entire family.

Soon after Brandee starting training, it was obvious to Mrs. Babin what her potential was.  But, she was on the quiet side, not confident in her ability, and tentative in her execution. Mrs. Babin knew that the key to unlocking Brandee’s talent was getting her parents on board and understanding it too.  The next step was getting Brandee in the leadership program and setting new goals.  Jeff Ebert says, “When she started, I didn’t expect her to be as good as she is, and to do so well at tournaments.   We really feel like she has accomplished a lot in such a short time.   And her confidence level has really gone up.”

In fact, she is now ranked 2nd in the Arizona Standings in her girls color belt division.  And the lessons in self – control, humility, and attitude that derive from the tournament experience are invaluable, especially when parents guide their children through these experiences, like Jeff and Candice have.  They also take full advantage of in-school tournaments and competition classes to help Brandee gain experience and develop her competitive strategies.

When I asked Jeff and Candice, “What is the most unexpected thing that has happened in Karate for Kids for you?”rapport building, public speaking, presentation skills and the elements of a winning attitude–humility, enthusiasm, respect and knowledge. “We’ve been so impressed seeing Brandee lead the stretch or the pledge.  At first she was quiet and hesitant, now she is very loud. She knows what to say and do and she’s loud.  All this happened in leadership.   Her participation level has quadrupled because of leadership.   She now raises her hand and answers questions.  She is not the quiet kid in the back anymore.” And at school, Karate for Kids has helped her focus and be more respectful toward her teacher and other kids.  Her academic teacher has confirmed this behavior.  And, that is what leadership is all about, taking those lessons and applying them outside of the academy. They were really clear:   LEADERSHIP.   Our leadership program is a completely separate class that teaches

Another important decision Brandee’s parents made on her behalf was private instruction.  “Brandee loves them,” Jeff said.  “She really enjoys it.   She likes the one on one time.   She enjoys asking questions and learning more about how to be good.” It is evident that the additional one on one time has accelerated her tournament performance.   Mom also said, “It has taken her ability to the next level and boosted her confidence immensely.     That confidence is what helped her set a goal to be girls color belt state champion in all three divisions, traditional forms, sparring and weapons! Parents should take full advantage of private lessons.  It has been so rewarding.”

Brandee’s parents play a key role in helping her face and move beyond disappointment, too.  At Karate for Kids, we consider being responsible for one’s self to be the most important lesson we can teach.    This skill will be valuable to anyone for success in life.  Again, competition is the greatest place to learn this lesson.    I asked Brandee’s parents how they felt about her learning to deal with struggle and disappointment.  Here’s what they said:  “We like to let her set her own goals and to not be afraid of failure.    We know (failure) will happen at some time.”

Jeff continues:  “Recently, she lost 5 to 1 in a regional sparring competition. On that day, she had already won 1st in weapons and 1st in forms.  So she was going for a third 1st place and she ended up really disappointed.  She left the ring crying.    I told her not to look at it like a failure.  She scored one point against the state champion.  She really did her best that day.   To become the best, you have to go against the best.  On that day she did and I told her she did do well.”

Jeff could have easily placed blame or shifted attention to others in order to make Brandee feel better.  He could have said, “The judges weren’t calling your points”, ”Those judges weren’t any good” “Boy, were you cheated today”.

By not saying that, Brandee’s parents helped her focus on what was really important, what she did well.  They helped her put into perspective what the facts of her performance were.  Every parent is faced with the same dilemma that the Eberts are.  There really is only ONE good choice:  to accept personal responsibility for what you did. Whichever choice the parent takes is the direction the child will grow:  either in the direction of personal responsibility or in the direction of everyone else is to blame for their disappointments.  Follow Jeff and Candice’s example on this if you want your child to be successful…..in all areas of their lives!!

Jeff and Candice have this to say to parents considering Karate for Kids training: “Come and see it and judge it for yourself.   See how much the kids in class enjoy it.   There is hardly a day that I don’t see a smile on every kids faces in class.  They enjoy themselves.”

Its parents like Jeff and Candice Ebert that create the opportunity and atmosphere for their daughter to achieve goals and learn important life lessons along the way.  That’s why we have chosen them as Parents of the Month for December 2010!!