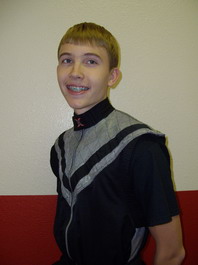 For a student of any age, Zac’s accomplishments are impressive.  For a 15 year old, they are extraordinary:

Zac was 4 when he started at Karate for Kids, and Christine remembers he was a “shy, very emotional child.  I knew Zac needed the structure found in Karate for Kids classes.” Zac also remembers that “I was quick to breakdown and cry if the instructor asked me to do something I hadn’t done before.” In other words, he cried a lot.

Sparring was tough, too.  “I never liked sparring when I was little.  When I moved from Tiny Tigers to K4K I always had to face a big 1st recommended Black Belt kid.  He always knocked me down.  I got kicked around a lot in class and even in tournaments.  I often told my parents I didn’t want to go.  Well, all I can say is the guy who knocked me around quit a long time ago, and I’m still here!”

Zac’s comments about how his parents handled the situation are very interesting:  “I may have said that I didn’t want to go, but my parents decided I WAS GOING, and I went.  It was always their decision to make, not mine.  And I probably would still be afraid of free sparring and would have quit if they had let me have my way.”

Zac’s accomplishments and successes are directly related to the fact that his parents supported him and made him follow through and face his challenges instead of running away from them.

Christine’s thoughts on Zac’s accomplishments are: “Because he experienced emotional difficulty when he was young and in Tiny Tigers, he is now sensitive to children like himself.  He is sensitive to shy or emotional kids and almost always knows when they are about to cry.  Parents have often told me that Zac can read their kids.  He sees the emotional breakdown coming and he’s able to head it off.”

“I really think Zac’s greatest accomplishment has been developing a thicker skin, learning to control his emotions, which has lead to success in other things.  As a teenager, I think he is more emotionally stable: he can take NO and uses it to make his performance better next time.  Competing on a national level in the ATA would have been way out of his comfort zone in the past, but he really does well with it now.”

Zac was a member of the “Demolition Demo Team” that won 2nd place in the world this past June.  He performed on stage in an arena with over 15,000 spectators.  I would say he is in control of his emotions!

According to Zac, “Leadership is a big- time confidence booster.  It gets you prepared to get up in front of an audience.  You can’t get that anywhere else.  Even my dance / ballet training is not the same.  When I’m on stage dancing, I’m not actually speaking to anyone, I’m performing.  Usually I can’t even see the audience.  And there are other people on stage with me.  But in Junior Leadership,

you’re taught to communicate. I can see my audience; I’m physically close to the students.  And that’s really different.  It’s very difficult.  In school, I know that kids who do well making oral presentations get better grades than those who hide behind their papers and mumble.  It’s obvious those kids were never taught to speak in public.  And that’s the kind of training I got in Junior Leadership.  You can’t get that anywhere else.”

All of the Birdwell children compete in lots of tournaments.  Here’s what Christine had to say about Zac’s competition career: “He’s the kid that shakes hands with everyone in the ring.  He’s there for the camaraderie; he takes it past the competition.  I’m thrilled when he wins, but he is the kid with humility and self-control. Other kids jump around and complain about their scores and about how unfair it was that they lost.  I’m proud of how Zac competes.”

Wow, that’s a way different attitude than when I started out, isn’t it?”

Over the last 11 years while pursuing Taekwondo, Zac has also trained at CAMPBELLS DANCE in Mesa.  Over the years, in the annual NUTCRACKER production, he has performed FRITZ, a soldier, a Russian, Faun, Reed Flute, one of the nephews, and this year he will play the lead role.  The ballet directors have asked him to include some of his martial arts techniques in this portrayal of the nutcracker!

Christine sums thing up with these comments:  “Karate for Kids has made Zac a well-rounded kid.  He makes friends easily and he has emotional self-control.  Parents of white-orange and yellow belts should be patient.  You need to let the instructors teach.  Give them the opportunity to find what will work for your child.  Even when all a student does is sit in the back of the classroom, progress is being made. Eventually, children go to kindergarten.  They might as well learn these lessons of self control at age 3, 4.  I often reassure parents that they are not hurting their children by forcing them to get into class.  Some kids are not always receptive and need a lot of encouragement, but Karate for Kids is safe and a good thing for them to do.  It’s a great opportunity for any child.  Instructors constantly encourage them. Karate for Kids prepares kids to face life’s challenges.”