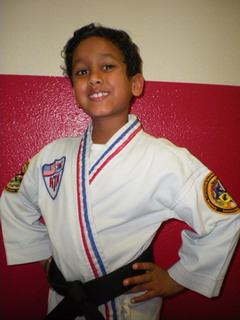 If you had videotaped Abhi Sathish two years ago when he transferred to Karate for Kids in Mesa as a blue belt and then watched him earn his black belt just a few weeks ago, you would have been awed by thetransformation. The video tape would have revealed a 5 year old blue belt who had no power or accuracy to break boards, could not focus enough to memorize forms, and was timid in sparring.

But when he tested for black belt, you saw a tiny, 40-lb, 7 year old smash through his green boards with a punch and step reverse side kick, moved through his form  (44 movements)  with confidence, focus, and power, and kicked and punched with intention in sparring while evading and blocking as well.

And just a few weeks ago at the GATHERING OF EAGLES V tournament, Abhi took 2nd place in sparring, 3rd place in forms, an 3rd place in weapons.

Originally his parents, Sathish and Viji were looking for something to help their 3 ½ year old son, build focus. They had noticed that he became bored easily and just wanted to move from one activity to another, instead of learning to focus.   They wanted him to have “more self discipline—to learn to concentrate on one activity and to build focus, rather than quitting and moving on to something else”. At one point they had him tested for the usual things like ADHD but the tests were negative.

The irony here is that they learned that Abhi was actually gifted and needed a different approach to learning.   He needed more of  a challenge. “When we came to Babin’s Karate for Kids, we found that challenge.   We saw the instructors expecting personal accountability from each student.   They make sure the students are doing it right.  They even delayed Abhi’s rank advancement for six months.   That challenge helped Abhi focus and learn to persevere.”

I asked Viji and Sathish how they feel about teaching their children about struggle, about dealing with disappointment.     Dad had these comments: “Abhi would be frustrated and complain if he did not always win or if it was difficult.    But now, he controls his emotions and enjoys the moment.  He has fun just doing his best.  And his overall performance in tournaments is much better.  The same is true in piano which he started about the same time as karate.   The confidence he has learned in K4K has helped him lots.   At first he was tentative and frustrated and wanted to quit piano.  With the confidence he has learned here, he is playing wonderfully now and has a recital scheduled for March.   Now he is passionate about music.”

Mom adds, “Especially at home, when we give him something to do, he approaches it with the confidence and enthusiasm that he needs to complete it.”

When Abhi first came to our school, he rarely spoke.   I remember that he never spoke to any of the instructors.   “Now,” Viji says, “his new found confidence has enabled him to communicate better, here in karate, at home and at school.   He is very outspoken at school and loves to share his karate stories with his classmates and teachers.  He is in 2nd grade now and is excelling the gifted reading and math program.”

Although our instructors have played a big role in Abhi’s transformation, we must emphasize how much Abhi’s parents, Viji and Sathish, have contributed.  Last summer, our newsletter featured the article, “SEVEN WAYS TO SUPPORT YOUR CHILD AT KARATE FOR KIDS.” Viji and Sathish have been following those guidelines. Despite the fact that they live 13 miles away and Sathish works in North Scottsdale, they do watch as many classes as possible. Viji even got here work schedule changed to arrange more time to watch class.  They reinforce life skills at home, and spend time reading the newsletter as a family.  “We ourselves learn a lot from the newsletter.  It’s so inspiring.”

They encourage practice at home. Mom and dad quickly established a close relationship with the instructors, always wanting to know how they could best support Abhi at home.   And most importantly, they followed those instructions carefully and trusted that guidance.  They have erred on the side of commitment, obviously.  There is no doubt that Viji and Sathish used the challenges Abhi faced as a “learning opportunity.” To teach Abhi (as we said in the JULY 2009 newsletter) “that achieving anything truly great in life will have periods of routine and repetition.  Life is not a video game.” Viji and Sathis have lived the answer to the question, “How hard should you push your child?”    Here’s what we said in that newsletter:

Most parents fell they push ‘too hard’ when in reality, they really don’t.  I say, “Err on the side of discipline and commitment.  For example, a parent recently said, “I don’t push my kids.  If he doesn’t want to come to class I don’t take him.  This is not a good policy:  it goes too far in the other direction.  Why?  Because it allows a child’s emotional whims to determine their behavior and actions.  Imagine if those whims were applied in other areas of his life:  what if they didn’t feel like brushing their teeth every night?  Or didn’t feel like doing their homework or they didn’t feel like going to college or the didn’t feel like getting a job?  Help your child understand that the lessons they are learning now will carry over into their adult life and the sooner they start building their discipline muscles, the easier life will become.

Viji and Sathish attend tournaments because they know these events help build confidence.   And while at tournaments, they have learned to “compete, not compare” Abhi’s performance to other children.  AND the result is what we heard earlier, “Abhi controls his emotions and enjoys the moment.  He has fun just doing his best.” And his tournament scores have improved too.    Isn’t that what you want for your child too?

Indeed, Viji and Sathish have now become black belt parents, and if you are wondering how to make something like this happen in your family, just ask them.

In fact, they are so excited that the entire family is now in class.  Shreya, Abhi’s little sister, has been in TINY TIGERS for about 6 months now and mom and dad started in January by using the “family special” we offered.  “We enjoy it!  it’s great!    And now that Abhi’s class is at 7:15 pm, we can easily take class right after him. All of our friends are always asking about it and we tell them, BABIN’S KARATE FOR KIDS is the best thing you can do to help boost confidence and discipline and self control.  The kids learn these lessons and then learn to use them everywhere, not just in karate.  They learn to deal with emotional struggles in a positive way, instead of whining or complaining.”