In the American Taekwondo Association, there is this annual event called the Tournament of Champions.   You must qualify to enter by virtue of the record you establish in various smaller events over the previous year.   In 2010, after more than 34 years of training, I qualified for this prestigious event.  There were only three competitors who qualified.  I tried hard, but came away with a bronze medal, not a gold medal.

Then in 2022, 12 years later and after 46 years of training, I qualified again.   This time there were twelve competitors.  Once again, I tried hard, but came away with a silver medal, not a gold medal.  At this competition I was 70 years old.

Obviously, there are disappointments in life, and these situations are mine.   But as I continued to participate in the week long event of which the Tournament of Champions is a small part, known as “WORLDs” I realized that there might be other gold medals to win.

In my overly-confident state, I invited my family to come and watch me “pick up my gold medal.”  That’s how I referred to it; not as a competition, but merely as an errand, like picking up the laundry.   Perhaps I understated the challenge, but truthfully, one year ago I won the regular Masters’ competition in a tie for first place.  I felt rather invincible. And that victory had come after 12-year absence from competition.

So knowing this was a special moment in time, I invited the entire family.  I have two grown sons, two daughters in law, four grandchildren, two significant others, and my supportive partner and wife. That makes eleven in total–quite the crew.

The competition began and I felt rather good.   When the chief judge called my name, I answered loudly and ran to the center of the ring, and I was immediately overwhelmed by eleven people yelling and screaming my name.   And they did not stop.   I tried to stay focused, but when the chief judge “lost it” and started laughing and smiling, I joined in.

As you already know, I did not win the gold medal.  Here I am receiving the silver medal with Rick Whitehead (1st) and Tony Langren (3rd).

But while we were waiting for the judges to prepare the results, I assembled the family on the “champions’ podium” and we took this picture. 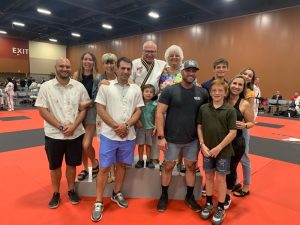 So let me ask you this:  who is going to hoot and holler for you even when you don’t win the gold medal?   Who makes your spirit fly and your heart sing?  How did you feel when your children were born or on the day you were married?

That’s where I got my gold medal.  Where will you find yours?