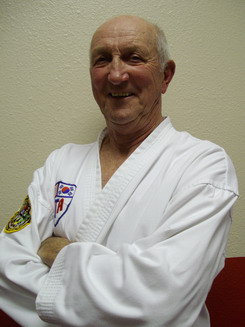 “Batter Up!!” Words that are very familiar to Jim Slevin, our March student of the month.  Jim, who comes from Winnipeg, Manitoba, has spent many years playing baseball during the summer and hockey during the winter.  “I still have all my teeth,” Jim jokes.  In fact, he has been an avid athlete his entire life, and he’s been around 76 years.  That’s a lot of baseball and hockey.

Jim was originally trained as an accountant, and worked for years for Ford Corporation in Canada.

He and his wife, Cynthia, have been married for a proud and happy 54 years.  They have 4 daughters and 6 grandchildren.

When he was younger, Jim had a friend who was a black belt instructor.  Although he was interested back then, his love for baseball and hockey kept him busy with no time for martial arts.

Jim and his wife, have been wintering here in Arizona for many years and three years again, Cynthia bought him an introductory membership here  at Babin’s Black Belt Academy for Christmas.  (What a gal!!)  And he’s been loving ATA Taekwondo ever since.  Jim trains with us from November through April, then heads back to Canada for the summer.

But he doesn’t slow down.  He works out with his Taekwondo 5 days a week doing squats, front kicks, punches and watches his training DVD to keep up with the forms.  And of course, he plays baseball.

Jim expected to learn self defense and improve his conditioning. And he’s quick to answer about the fitness element in our classes: “the workout has been everything I hoped for and more!”

Jim’s comments about FORMS are most interesting.  He says that “when I get the form down and can move through it well, I feel that I have really accomplished something.”

When I asked him if there was anything unexpected he has encountered in Taekwondo, he said,”Yeh!  Sparring.  I did not expect that, but I like it, too.  I like the contact, the vigorous workout and the blocking.”

He also mentioned something else unexpected:  I”ve always been ‘gung ho.’  And Taekwondo has calmed me down.  It’s improved my baseball. And I’m not as quick to yell at the umpire and that’s good.

Jim’s comments to potential students are great:  “in Taekwondo you can really develop yourself physically and mentally.  It’s a complete development program.  It covers just about everything a person could want.  And it makes me feel good!”

If you have procrastinated about getting started in Taekwondo, learn a good lesson from Jim.  Regardless of age, getting started in something new is beneficial and fun.  It will have hidden benefits, enhance your life and keep you feeling young!!!

Jim Slevin is a “kick’n” example of youthful enthusiasm and perseverance, a lesson someone half his age can learn from!!