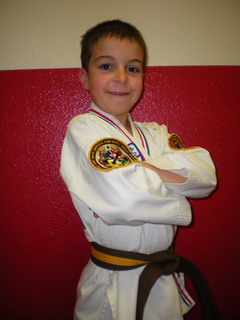 Our goal each month in featuring students and families is to help everyone understand what it takes to be successful in KARATE FOR KIDS.   It’s easy to see why we are featuring Joey Petrone and his parents, Chris and Stephanie.     Read on!!

Chris and Stephanie use KARATE FOR KIDS as a way to reinforce their teaching of basic values like discipline, respect, confidence, and enthusiasm.

Joey started KARATE FOR KIDS about a year and a half ago at an on- going after school program at Rancho Solano, his school.  He started there in August and in November earned his first belt.  From that point on, he has been unstoppable!!

“I wanted him to build some confidence and discipline,” his father, Chris says.  “I always doubted myself and he is an absolute clone of me.  I knew he could gain confidence through karate.  I’ve been happy with enrolling him since day one.”

Chris and Stephanie are business owners themselves, the local distributor of Boer’s Heads Meats, and Stephanie’s comments were very interesting: “I want Joey to be able to take care of himself.  And as he gets older, karate looks good on a resume.  I interview people all the time and I always look for either military service or martial arts training on a resume.  That tells me that person will follow through on stuff and has discipline.”

What about Joey himself?     Chris says, “He is really into karate.  He’s always practicing, even in public.  I’m waiting to get some food and ask him what he wants, only to find that he’s doing his form.” And Stephanie adds, “I now see exactly what I wanted to see in Joey—confidence and pride.  When he talks to his friends, he is really proud of what he does here.  And he is in great shape.”

When creating a successful KARATE FOR KIDS experience, the philosophy of either “responsibility or blame” always comes into play.   Joey is very enthusiastic about competition and his parents support that through private lessons.    I asked Chris how Joey deals with disappointment:   “Of course he has to learn to deal with struggle and losses.  I don’t want to paint a pretty picture just to make him feel well.  If he was not on his game, then that is why he did not win.  It is what it is and he needs to understand that.” Again, Chris and Stephanie make a specific choice to teach Joey that he is responsible—not the judges or his teachers—for winning.   There is no value in placing blame on others for not winning.  Saying things like “You had bad judges” or “The judges gave you bad scores” just to make him feel better would de-emphasize the importance of personal responsibility and the value of working hard.  Joey moves on, comes back to class, and keeps working on getting better.

Another critical element to a successful KARATE FOR KIDS experience is using the weekly homework sheet.   Stephanie says:  “The stars and Babin Bucks really mean something to him.  At home, he wants his progress report filled out positively so he can get his blue star and he always improves his behavior to get it.” And Chris says: “We even use some of your terminology, like saying, ‘Is that ‘behaving like a black belt’?’    If I tell Joey, ‘I’m going to tell Mrs. Babin that you left your gear out’, he gets right to it and picks up everything.” Because being in class means so much to Joey, he has learned the simple lessons of discipline.   He comes right home and gets his homework done so he can get to class or have free time.

We’ve already seen how KARATE FOR KIDS training has built confidence, fitness, and discipline in Joey.  Chris and Stephanie tell this great story about how Karate for Kids lessons transfer to school:

“Joey won a special character award for displaying respect, courtesy, and responsibility at his school, Rancho Solano.   It’s a really special award and there is only one per grade level per quarter.   The award is presented at a school assembly in front of all the teachers, students, and parents.  All the children were sitting on the floor in groups.  Each time a winner was announced, that student would run straight from where he was sitting on the floor, through the crowd, tripping over and stepping on other students along the way.  When Joey’s name was called, instead of running straight to the front, he carefully stepped to the side of the crowd, ran to the back and then up the side to the front.  His display of respect was quickly noticed by all the teachers.  Of course, we knew he was doing what he was taught at Karate for Kids.  This behavior was a good example of how we feel Karate for Kids training separates Joey from the crowd. “

We often talk about the connection between structure and confidence.  When parents create structure in their children’s lives, the children quickly gain control over their environment and that develops confidence.    “For Joey, going places and doing new and different things sometimes presented anxiety.   Since coming to KARATE FOR KIDS, however, Joey has learned how everything works here and he knows exactly what is going to happen.   And that builds confidence,”Stephanie says.

Chris and Stephanie have this to say to other families considering getting started in KARATE FOR KIDS.  Chris said, “I’m a fan.  I highly recommend it.  Even if lack of confidence or anxiety are not issues for your child, I recommend it for the lessons that are taught.  It’s not just a sport or about fitness.  It helps the mind.  Enrolling him in KARATE FOR KIDS is the best thing we ever did for Joey.”

Stephanie said:  “I look around and see the young people who teach here, like Mr. Birdwell, Ms. Birdwell, Mr. Babin, Mr. Meyer, Ms. Leckey and I think, wow, if Joey could be teaching here when he is 16, 17, or 18, that would be so much better for his resume than flipping burgers.”

As always, behind every successful, productive kid are supportive, involved parents.  Don’t make any mistake about it– Joey is training hard, listening to his instructors, and always gives 100% when ever he’s in class.  His parents create the structure, support and consistent participation that make it possible for Joey to excel!!