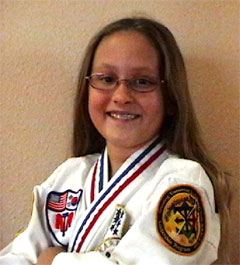 Although nine year old Amanda Teppo has not yet earned her black belt, her mastery of black belt skills like SELF CONTROL, LISTENING, CONFIDENCE AND PERSISTENCE have made her a “black belt in heart” for several years now.  Her story is testimony to the value of starting at Karate for Kids at a very early age—even as young as three.

For example, her 2nd grade teacher told her mom, Cindy, that “Amanda has the ability to listen, pay attention and follow directions. As a teacher, what more can I ask.  If all my students did that, I would be so happy.” This comment came after Amanda had spent three years in Tiny Tigers!!  That’s black belt skill #1; FOCUS.

Because she started so young, she has had many years under the positive influence of Karate for Kids instructors.  The result, according to her mom is “self-confidence.  In Karate for Kids, she has always been encouraged to speak up, she has become very expressive and self confident.  She has taken this skill outside of Taekwondo.  She is the most expressive in her brownie group.  She always raises her hand in school to participate.”  In fact, her 1st grade teacher said that “when the principal comes in to audit me, I always call on Amanda because she always had the right answer and was eager to speak.”  That’s black belt skill #2: CONFIDENCE.

Amanda’s mom also said that math is her most challenging subject in school.  “She will work on a math page for a long time, she’ll erase and erase and try again and again until it is done correctly.”  Her Karate for Kids instructors see the same thing when Amanda works in class.  Sometimes, learning a form does not come easy.  Despite the difficulty, Amanda keeps on going.  That’s black belt skill #3: PERSISTENCE.

So how did all this start?

Amanda began training almost 7 years ago, at age three.  If you watched her at that time you might not have predicted the successes I just described.  Her mom commented; “We spent a whole year with her often falling asleep on the way to class.  And once in class she  was very interested in watching herself in the mirrors.  I remember saying to her before class: ‘Just try to pay attention today.’”

“Many times when we brought her in sleeping, Ms. Birdwell would come over and say simply, ’Come on, let’s get a drink’ and that was enough to get her off my lap and into the classroom.”

Her mom’s hopes in the beginning were simple: just to learn to pay attention.  I asked Cindy why she kept bringing Amanda to class and her response was quick and clear:  “Amanda always had fun and enjoyed coming and everyday there was a little bit of progress.”

I asked Amanda’s mom what she would say to families considering enrolling at Karate for Kids:  “Get started at a young age.  Then the important life skills like RESPECT, LISTENING, PAYING ATTENTION, AND FOLLOWING DIRECTIONS become every day expectations and accomplishments.  Parents who wait till the kids are older will face a greater challenge.”