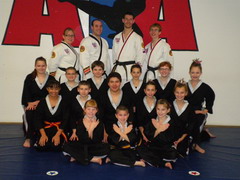 The average age of the 4 team coaches is 19.  The average age of the 14 team members is 12.  What can people so young accomplish as a group in a few short months?  Plenty!  And when you see their performance on Saturday February 6 at the Gathering of Eagles V regional tournament, you’ll see first- hand what can be done with the life skills of Goal Setting, Perseverance, Discipline, Respect, Courage, and Positive Attitude in action.

Back in August of 2009, auditions were held at the academy.  More than 45 students tried out—14 made the team.  It took courage to face a panel of judges and get put through the paces with technique combinations, weapons patterns, and board breaking.

Parents and students signed an agreement outlining the commitment that was going to be needed to make this a successful team.  Birthday parties, movies with friends, and free time would have to be sacrificed in order to grow personally and as a group.  They were going to have to persevere to learn new routines, not as individuals (as in their Karate for Kids training) but as a group.  It wasn’t going to be easy, they were going to do things that they never thought possible, stretch their physical and mental ability to the limit, and they were going to get tired, frustrated and sometimes overwhelmed.

As the weeks and months went on, something amazing developed.  They became more confident and they were reaching new levels of physical skills.  They faced many challenges and overcame them. They were getting stronger.  They became a TEAM.

Over 50 formal practice sessions (most 2 hours long) plus kids getting together at each others homes for more practice have produced the end product that you will enjoy on February 6.–more than 100 hours of training that will produce a fantastic demonstration and benefit them for a life time.

When you see these young people at the academy or the tournament be sure to congratulate them.  They deserve the recognition and the respect.

And let’s not forget about their parents!  None of these kids could drive themselves to and from practices.  After all, the students could only be committed to excellence because their parents supported and encouraged them.  Thanks to all moms and dads.

Another very special thanks go to Vince and Christine Birdwell.  They are responsible for the team uniforms fitting properly and everyone looking their best.  Sewing and ironing for 14 kids—you are the best!!