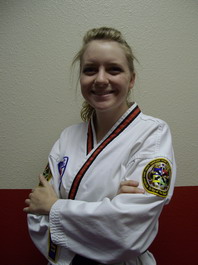 “It has been so great for her in many ways.  Now, it has simply become a part of her life!” That’s what Valri Bauer says about her daughter, Kayleigh, age 20, who is now celebrating TEN YEARS in our program.  Kayleigh graduated from in Red Mountain in 2006, went to COTTEY COLLEGE where she earned her A.A Degree in 2008, and is now pursuing a degree in Sustainability at Arizona State University.

Kayleigh is now a 3rd degree black belt and in the very near future will become a 4th degree and a CERTIFIED INSTURCTOR through the American Taekwondo Association.  But let’s look back for a minute at her beginnings as a nine-year-old.

By 1998, Kayleigh had done dance and soccer, and her mom says she really didn’t like either, but Kayleigh’s comment is more interesting: ”I was in dance class but I wasn’t any good at it.”

From the beginning, Valri and Dave (Kayleigh’s dad) liked our positive approach to teaching, but it had a profound impact on Kayliegh: “I remember being a white belt and front kicking a blue target and the instructor said, “good kick,” and that was the first time anything went well for me in a physical activity.”

It doesn’t matter how “good” that first kick really was because the result of that encouraging comment has been 10 years of disciplined training and positive experiences.

Mom and dad also note that Taekwondo has really helped build Kayleigh’s confidence.  “When she was younger, she was always the quiet student.  By high school, though, the confidence she developed through her training at the academy really helped her with academic decathlon (rigorous academic team competition that involves written tests, interviews, and speeches.)  She pursued that goal with a new confidence and strength.” And her team made it to the state competition.  “I liked academic decathlon because you get out of it exactly what you put into it.  I knew if I studied hard, I would do well, and I did.” Kayleigh said.   The same is true in Taekwondo; you get out just what you put into it!

I asked Kayleigh, “What has been your biggest accomplishment in Taekwondo?” and her response was quick and clear:  “Clearly my black collar (certification) is my biggest accomplishment.” She goes on to say: “The teaching thing is important.  Teachers have always meant a lot to me.  I always wanted to be a part of that community that passes on knowledge.  At a certain point in Taekwondo, you realize that everything you are learning, you are learning so you can pass it on to someone else.  That’s why certification is so important to me.  Our little classroom is our ’mountain top’ where we are learning.  When people join, they do look for a little of that mythical master/student experience.  I want to be a part of that.”

Mom and dad have said that they liked that  “Taekwondo develops the whole person, not just one part:  It’s not about trophies or titles: it’s about learning self discipline and respect for others; physical and mental control of yourself.  And being persistent.”

Kayleigh’s comments confirm that:  “I’m stronger physically than if I had not trained.  But also I’ve gained inner strength, especially patience.  Working with Tiny Tigers, that’s a good way to build patience!  Taekwondo gives me a sense of purpose; we all need to know where we are going.  In Taekwondo, I always have goals—things to work on—AND people pushing me.  It’s great!!”

Considering all that Kayleigh has accomplished, we need to ask you, “What will your 9 year old white belt be doing in 10 years?”  When you stick with Taekwondo like the Bauer family has done, the results are profoundly life-enhancing.