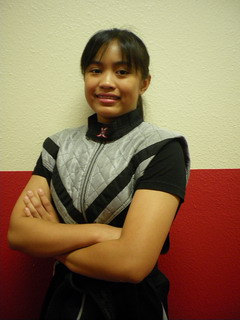 Over four years ago, Senior Master Babin did a demonstration at Queen of Peace school in Mesa.  It was like most other demos, except for a young 10-year-old girl watching, Leslee Eamiguel.  She was mesmerized.

Leslee held on to the wish of learning martial arts for two years, then it became obvious to her parents that she wasn’t going to let this wish go, her dad started looking for a place for her to take lessons.   Leslee was twelve when she started classes with us at Karate for Kids and says she wanted to “learn self defense” and “set new goals.”

Her father started a diligent search for a teacher.  “I actually went to seven academies before I found Babin’s Karate for Kids.   When I walked in here, I loved the family atmosphere and that’s why we enrolled here.  It was clearly the right place.”

While talking with Mr and Mrs Eamiguel, it became obvious that the unexpected benefits of karate for kids training have far outweighed what they expected to happen.   For example, like most parents, they hoped for Leslee to become more confident.   And sure enough, that has happened.  She was quiet and shy and now is “bubbly and outgoing.” “She speaks with confidence to all her classmates and adults as well.  And she also has confidence to stand up for what she believes in,” Mrs Eamiguel said.

But the unexpected benefits have been overwhelming and exciting:

BEHAVIOR AT HOME:   Mrs Eamiguel says that Leslee is much more disciplined: “She knows how to reach goals every day, especially with household chores.  She is very responsible and focused on the things I assign her to do at home.”

GRADES:  “Her grades have dramatically improved.  She has gone from NO A’s to ALL A’s.  She is on the honor roll and now is in the honors program.  She is well respected by teachers and classmates. Karate for Kids has improved so much of her life.  We’re very excited!” her dad said.

NEW GOALS:  “We never expected her to compete, much less compete at the high levels she has and even win.  She went to World championships and took 3rd place in traditional forms.  And she has set the goal to be a state champion.”

THE ATA: “We never expected the organization (ATA) to be what it is.  We just went to World Championships and saw a huge, very impressive organization.”

NEW FRIENDS:  “We never expected Leslee to have this kind of social experience.   She has new friends here in Mesa but at World Championships, she also made friends from Chicago, New Orleans, Dallas, and on the East Coast.  They’ve even exchanged emails.” It’s obvious that Leslee and her friends will be helping their parents make plans to meet at future ATA events.    And this kind of social experience—both for kids and their parents—is an often-overlooked benefit of membership in the ATA.

I asked Leslee how she feels about the “struggle,” about wanting to win 1st place and NOT winning:  “ At World Championships, I was very excited to be in the ring with world champions.   I like competing with the best of the best even though I did not win 1st place.  If you don’t win, you can’t stop.   You need to keep going and work hard at it.” Her dad adds“You can only know what you can do by extending yourself and trying new things.  And you have to remain positive.  Leslee does that well.”

And Leslee’s mom said, “You need to put it in your head that you can do it and do not be scared.  You can’t let fear make you miss opportunities.  Think positive.”

Mr. & Mrs Eamiguel have even taken on the role of encouraging Leslee’s classmates to compete and go to big events, like World Championships: “I want them all to be active.   I tell them, ‘I’ll see you at the national tournament.’    This is what I find exciting.”

As you read about Leslee’s family, start setting goals for yourself.  Attend the in-school and regional tournaments and think about attending any of our National events around the country.  You, too, can experience some very pleasant results.   Let’s congratulate Leslee Eamiguel for all of her many personal and martial arts accomplishments.  Track her progress as she pursues a State and World Championship Title!!