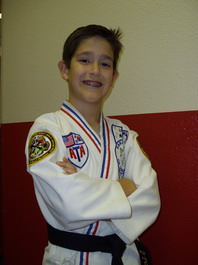 Looking for an interesting activity for their 5 year old son, Kyle and Maria Longley came to Karate for Kids four years ago and enrolled Sean.  “We didn’t want to put him in team sports at that age and felt that the individual nature of the Karate for Kids Program in Mesa would suit him well and help develop listening skills.”

And from his very first class, Sean has shown a totally consistent attitude.  “He never complains about coming.  In fact, even though he has friends playing football, Sean has consistently insisted on doing Karate for Kids.  It has become a real point of pride for him.” In fact, Sean recently did a demonstration all by himself in front of 800 children at his school.  Now that’s Black Belt Attitude!!!

I asked Mr. & Mrs. Longley about the overall impact of Karate for Kids on Sean:  “He’s really learned a broader concept of RESPECT.  He carries this idea to school.  His teachers love him.  But he also now understands that he can apply respect everywhere, to all people and also to all things.  We’re really pleased with that.”

And every instructor over the past four years has consistently enforced that discipline and respect.  “We’ve found that parents can say only just so much when it comes to reinforcing respect and self-control, especially at home.  Sean respects his Karate for Kids instructors so much that the weekly  progress report was a very useful tool in shaping behavior, like learning to THINK before you SPEAK.”

When Sean began sparring in K4K, mom had some reservations, but she was really impressed how he focused quickly.  Now sparring is one of Sean’s favorite things to do.

As with so many families, the Longley’s place high value on persistence and teaching their children to face adversity and struggle through it.

“Sean has always done well at school.  But here at karate he faced challenges, like not being ready for every rank promotion.  In Karate for Kids, he has learned not to run away from struggle.  For example, it was tough enough becoming a black belt, but after earning it, he did not qualify for his first black belt mid term; then he missed another for vacation; and then missed another.  But he has totally refocused himself now, passed his first midterm, and is on his way to his 2nd degree black belt.  He’s learned that not everything in life will be easy and that he can use his attitude to persist and win. He used this skill recently when he entered the 4th grade ‘advanced learning program’ at Mesquite Elementary.  Wow, has it been tough.  He actually got failing marks on some papers in the beginning, but again, he has been able to refocus, get back on track, and is doing great now in this challenging program.”

You might wonder what the Longleys would say to others about getting started in Karate for Kids: “We drive a good distance to get here.  On that drive we pass 2-3 other karate schools.  We’ve been impressed with the quality of instruction here at Babin’s Karate for Kids.  The program is challenging and fun, and it reinforces family values. This is the place to go and the activity to do.  And with schools cutting back on PE, we know that Sean can make Taekwondo a lifetime activity.”

Here’s what Sean has to say, “I think it’s really fun!  I like to tell my friends about it.  I like sparring and weapons the best, but really I like everything about it!!”