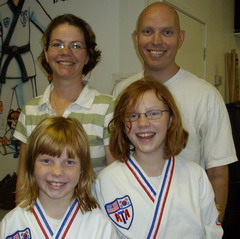 A year and a half ago, Kris and Neil Houston told Mackenzie, their 7 year old daughter she could try karate.  Mackenzie was quite interested and enjoyed the classes immensely.  During Sibling Month, Mackenzie’s sister, Madison also joined.  And that’s the beginning of a wonderful story of confidence and exceptional parenting.

In this short 18 months, Mackenzie and Madison have both earned RED BELTS, Mackenzie won a triple crown state championship, and both have excelled as junior leaders, helping other students gain the confidence they have earned.

Kris explains: “Before we started at Karate for Kids, Mackenzie was quite shy.  And Madison lacked confidence and was struggling in school, especially in math.  Now, Madison excels in all areas at school and Mackenzie has become ‘leader of the pack’ in most of her social circles.”

Neil says:  “I like Karate for Kids because it is team-oriented, but also very much an individual activity that builds confidence.”

I asked Kris and Neil if there was anything unexpected they had encountered in the girls training: “I’m impressed with the whole approach to values and morals and self respect,” Neil said.  “Especially with other adults, both girls are very respectful, even to teachers.”

“Both girls present themselves to teachers with a much higher level of confidence. Madison especially always had a goofy walk; now her stride is confident and her head is up high,” Kris commented.

The Houstons are quick to offer comments to potential members:  “Karate for Kids creates such great discipline and focus.  It gives them the confidence to go out and do what they want,” Neil said.

“Karate for Kids creates a more well-rounded person.  It’s not just about punching and kicking.  It is about values and morals and every day stuff that helps keep kids safe,” Kris said.

The main reason the Houstons are Parents of the Month is connected to a story from a year ago.  Last spring, the whole family traveled to Las Vegas for the Spring National Tournament.  The kids were just camo belts at the time; it was their first national event.  And it was a disaster!  The judges in Madison’s ring made some errors with scores and it became obvious that awards were going to the wrong competitors.  Tournament officials and parents got involved. “I was really disappointed in the behavior of the parents,” Kris said.  “These kids were just 11 years old. Madison was making friends with kids from all over the country and these parents were arguing and causing a scene.”

The way Neil and Kris handled the bad situation has made a great difference to Mackenzie and Madison.  Because their parents modeled self control and respect, these girls learned that making friends is more important than earning a trophy.

Neil and Kris did not let this one disappointing experience stop the kids from competing and training.    Mackenzie went on from that day to win a TRIPLE CROWN state championship and Madison has moved on to being a strong dependable junior leader.  Both will soon be black belts! The true victory on this important day was the way Neil and Kris demonstrated respect and self control.   Mr. and Mrs. Houston have blended the values, etiquette, and discipline of the Karate for Kids program perfectly with their own vision for their children.  When you meet Madison and Mackenzie, you’ll be impressed with the results.