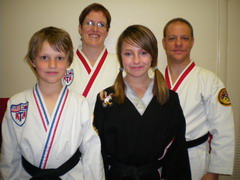 Four Black Belts in one family

FOUR BLACK BELTS in one family!

One black belt in a family is a huge accomplishment… but FOUR?  In our 30 years of teaching there have been only five families to accomplish this.   So let’s learn more about Matt & Mary Staeuble and their children, Kayla and Matthew.

In April 2006, Matt and Mary were looking for an activity for the children.  A coupon came in the mail, and when they visited KARATE FOR KIDS, they liked not only the karate, but also the life skills lessons.

“Kayla was nine at the time and was afraid of everything and we wanted her to gain confidence.  But she refused to go into class because it was full of boys.  Finally, Ms. Recker got Kayla to sit in the room during a Tiny Tiger class and later she joined that class.   The crazy thing is that within a year, Kayla became a state champ in sparring.  Once Ms. Simon told Kayla her kicks were good, she took off.  And KARATE FOR KIDS has helped her have more confidence when meeting people, and she is more able to resist peer pressure and stand up for herself” mom proudly says.

The very next month, Mary did a Mother’s Day Special, and then Matt joined in June on the Father’s Day special.

Mom, Dad and Kayla all earned their Black Belt on the same day.  Matthew, starting in the Tiny Tiger program moved at a slower pace. He earned his black belt on March 16, 2010.

I asked Matt and Mary about their special accomplishments and any surprises in their training, “The camaraderie and friends we have made has been really unexpected, but really great.” Matt said.   “I lost pounds and gained a new confidence” Mary said. “I’m much more comfortable now getting out of my comfort zone.”

Matt said, “My biggest accomplishment was earning my 2nd degree.   I worked on my board break for twelve weeks.  It was really hard.  I knew breaking it was not a sure thing so I worked really hard for that one moment and it paid off!”

Mary said quickly: “My big accomplishments were getting my black belt, losing weight, and breaking my boards on the first try.  I’m really proud of that.”

Kayla enjoys the social aspect of Karate for Kids, but she is not in class just to make friends.   In addition to earning her black belt and a state championship, Kayla has also earned a spot on our ELITE DEMO TEAM twice, most recently at the tournament on Feb 6, 2010.   These team members must audition for the team, be chosen by a panel of instructors, and also complete more than 100 hours of advanced training over a 5-6 month period in addition to their regular classes.

Young Matthew enjoys leadership training and has helped with rank promotions on a regular basis.  He’s developing important skills that will benefit him in all aspects of his life.  Impressive for a boy who just had his 9th birthday.

When asked what was the biggest impact Karate for Kids has had on the family this is what Mary had to say, “We have a common language to talk about things like life skills, like respect, and we have a real common tie.  We can talk about technique and we all can offer input to each other.

Matt says, “I’m also excited to bridge the gap between father and son.  Matthew is really pushing me to learn sword.  We work on it together; we have more together than just school, friends, and TV shows.”

This family loves to compete so I asked them why?  “Kayla was our first competitor.   We all got so excited watching her that we started competing and haven’t missed one tournament since. I like the fun of going and seeing how I stack up against other women,” Mary said.

“I like competition because it is challenging, I like getting the instant feedback on how I’m doing,” Matt said. “I also like the social aspect.  A tournament is the only time I get to see the guys in my ring.  I like seeing how I stack up with the other men and how that matches with my training.   And I like building relationships with other instructors.”

Clearly Matt and Mary Staeuble see how tournaments create a much broader life experience for themselves and the children.  And the Staeubles boast several State Championship Titles….

It is very interesting that one of the reasons families quit presented NO PROBLEM at all to the Staeubles.   “From the beginning, we were never in class together.  Not even the kids.  Kayla was a Karate Kid and Matthew was a Tiny Tiger.  Because of his work schedule, Matt took class in the morning and I took class at night.  But this crazy schedule actually meant that we got to meet ALL the instructors.  We have always had a broader experience because we have not been in class together.” Mary said.  And another obstacle for parents is making corrections.  Matt comments:  “It’s the instructors’ job to make the corrections on the kids, not the parents.” That’s valuable advice for all karate parents.

What would you say to other families about getting started? Mary said, “I’ve done gym class and jazzercise and always felt self conscious.  Not once have I ever been made to feel like that here.  No one has ever looked at me with that expression, ’what is she doing here?’  I’ve always felt comfortable.   I had an accident and for several years I have had chronic migraines.  After working out here, I lost a bunch of weight, and I still get migraines, but once every 6 months not every 6 weeks.”

And Matt said “All the excuses that prevent you from starting will go away after the first month.”