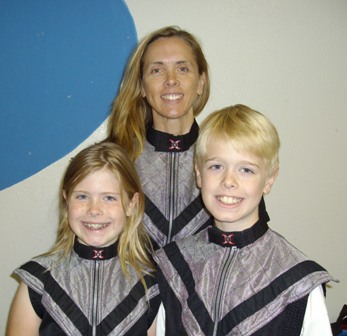 It seems so simple.  A parent says to the child, “I know you’re disappointed.  But you are not quitting.  Pull yourself together and try again.”

That statement sums up Dawn Thomas’ approach to KARATE FOR KIDS and to life in general for her children.  And the result of that philosophy has been very positive:  THREE BLACK BELTS and FIVE STATE CHAMPIONSHIPS in the same family!

Let’s look back at how this all started.

Hannah was just seven when she saw a karate demo at school and asked her mom, Dawn, about getting started.  Although Peyton, then age 8, was reluctant, Dawn enrolled the kids and herself.  She had seen other parents running around to multiple activities and she knew that the discipline and emphasis on memorizing forms at KARATE FOR KIDS would be good for both children.  Although Dawn herself had been very active working out, she found those workouts to be “mindless” and wanted something for herself that would stimulate her mind as well as her body.  So a little over two years ago, all three started at Karate for Kids.

And with Peyton and Hannah about to earn their black belts, Dawn says that the discipline of training has been the greatest reward from their experience.  “Often when I talk to my adult friends about karate, they say things like; “I wish I had stuck with it. OR ‘I wish my parents would have made me stick with it’.  That’s why I insist on Peyton and Hannah sticking to it.”

Dawn continues; “Regardless of the personal challenges, whether it is missing a board break or not getting permission to advance or resistance to sparring, I just say to Hannah and Peyton:  It’s not that big a deal, just suck it up and keep going.” This approach has had profound results for both children.  Although Peyton was not as eager to start as Hannah, he recently won TWO STATE CHAMPIONSHIP TITLES and told his parents, “I want to be a 3rd degree black belt!” Just think, if Dawn would have let Peyton—with his limited life experience–choose not to get started, he would have missed this opportunity of personal growth and success!

Here’s another example where parental “insistence” has paid off.  Peyton, like many youngsters, had told his mother, “I don’t want to compete in regional events because there are too many people watching me.” Dawn commented:  “I forced Peyton to try a regional competition, and then he quickly realized that there are MORE people watching him in the small in-school events than in the bigger regional events.” Again, Dawn used HER judgment to help Peyton overcome his challenge and unfounded belief.  With a new confidence and understanding, Peyton has gone to many regional and national events like the tournament in Las Vegas.

Peyton has developed a real interest in XTREME SWORD competition.  He greatly admires John Meyer, a 16 year old leader and Elite Demo Team Member, and is inspired to be like him!

We talked about helping the kids deal with disappointment.  Recently, Hannah did not pass her test for 1st degree black belt.  Dawn said: “She was really mad!!  She cried and said ‘I’m quitting!’  I told her, ‘You’re not giving up!  NO, you ARE going to do it.  You can’t keep crying.  Just stay calm and get focused on what you are supposed to do.’  I even told her before she went to sleep ‘Visualize breaking those boards.’ And I also told her ‘I don’t want to hear, ‘I can’t do it.”

Those of you who saw Hannah test last month know how well this advice worked.  She broke her boards with great confidence and when she had trouble with her form, instead of losing control and crying, she pulled herself together, got focused and got the job done.  She had the support and wisdom of her instructors and parents all along, a team effort that enabled Hannah to succeed.

I asked Dawn about her family’s accomplishments in KARATE FOR KIDS.  Her comments are revealing:  “MY biggest accomplishment has been competing.

It’s been hard trying to support the kids and watch their competition while doing my own competition at the same time.

But I compete because if I expect the kids to do it, then I should too.  And that’s why I do ATA XTREME competition as well.”

The LEADERSHIP program has really impacted the children.  Both Hannah and Peyton enjoy helping other students and do so every week.  And they have put their leadership lessons to use in competition and other areas of their life.  Recently, at her great grandfather’s funeral out of state, Hannah served as a greeter, saying hello to everyone and showing people to their seats.  Dawn proudly mentioned how people who didn’t know her were all asking “Who is that girl?”

Dawn’s advice to parents considering enrolling is very basic: “Make time for the classes, make it a habit and stick to it.  I meet parents all the time that have let their kids quit soccer, baseball, karate, or anything after only a few weeks.  They say, ‘My kid didn’t like it.’  And I think, ‘How can you know after such a short time?’  A lot of kids only want to do things that are easy for them.  If a sport or assignment is difficult, they don’t want to do it, their parents let them quit!  I don’t want my children growing up like that.  Just because something is difficult doesn’t mean it’s not worth doing. The more you keep chipping away at it the easier it becomes.  They need to learn to stick it out.  It’s more fun that way.”