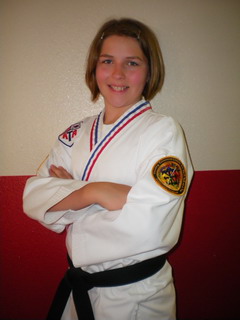 QUALITIES OF A LEADER–Enthusiasm, Self Control, Ambition

A few years ago, we went to Porter Elementary and conducted a “safety night” for the entire school.  We used the same material you hear in our classes about “saying no” and “safe side adults.”   After that class, more than twenty-five children came to our academy.   Alexis Campbell was one of them and now, two and half years later, Alexis has earned her 1st degree black belt and is working toward her instructor certification!! (More on that later) To say she is excited about KARATE FOR KIDS is an understatement.

Lexi was just nine when parents, Mike and Sara brought her in, hoping that she would build confidence and learn some self defense.    Lexi didn’t even make it through the 30-day trial period before she insisted her Mom and Dad enroll her. She’s been smiling every since.