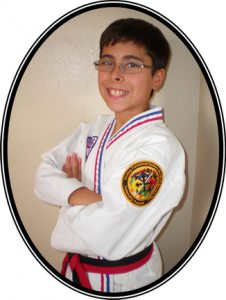 Two straight years of focused effort has produced an 11-year-old black belt and two first places and one third place in our recent ATA Regional Tournament.  That’s a summary of Nick Lucchese’s life as a student of Taekwondo.   Like many other nine-year-olds, Nick did not have an interest in other “traditional” sports, like football or baseball.

According to dad, “Nick actually wanted to do fencing because he really likes weapons, but he went to see the movie GI JOE and saw some “karate fighting” in the movie.  He really liked that, and his cousin was taking classes at Babin’s Karate for Kids at that time.  He came to a “safety class” with his cousin, Austin, and he enrolled soon thereafter.”